At Enes 2015 the RusCable.Ru portal got a reward for the first place in the Russian competition Media Energy Industry 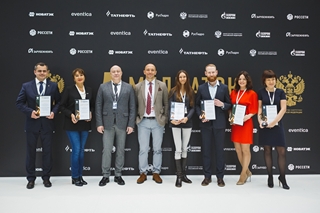 The RusCable.Ru portal took the first place in the nomination “Efficient choice. For a successful realization of the interpretation of the topic of import substitution in Energy Industry” a category “federal Mass Media” of the First Russian competition of Mass Media, press-services of Energy Industry companies and regional administrations “Media Energy Industry”.

RusCable.Ru represented a project “Questions of import substitution in a cable subsector”, which got 4877 votes in its support.

The ceremony of reward took place on November 20th on the second day of IV international forum on energy efficiency and energy-saving ENES-2015. The RusCable.Ru portal was represented by deputy general director of LTD “RusCable” Evgeniya Usatova who got the reward from the hands of the organizer of the competition.

-We are very glad that our project was selected by the expert council and got such a large support at the competition, which allowed to take the first place. For us it is an absolute rate of quality of the work done by the portal,- said Evgeniya.

For the choice of competitive works, which appeared in the final, the Expert council was formed. Among the members of it there were leaders of the largest federal business Mass Media, faculties of journalism of the Russian high schools. Representatives of the authorities, experts in the field of Energy Industry. They were Anton Inutsin, the deputy Minister of power engineering of Russia, Sergey Mikhaylov, the general director of TASS, Michael Komissar, the chairman of the Board, the general director of the IA “Interfax”, Sergey Yakovlev, the main editor of the “Kommersant”, Igor Lobovskiy, the President of the Global Energy Prize, Dmitriy Kiselyov, the general director of the INA “Rossiya Segodnya”.

The ceremony of the reward was opened by Dmitriy Peskov, the press-secretary of the President of Russia, the Deputy Director of the Administration together with Minister of power engineering of the RF Alexander Novak.

Dmitriy Peskov about the competition: “Every day Russian power engineering makes news of the national and international scale: new technologies are actively inculcated, new partnerships with foreign companies appear, our companies enter new markets. I'm sure that the annual competition “Media Energy Industry” will help to find and distinguish the most interesting and bright publications and plots in this stream of news, will announce the names of their authors, the main reward for whom will become professional recognition”.

The RusCable.Ru portal thanks all the participants of the voting who gave their votes for us. It is your support, which allowed us to reach this result.

From November 1st to 10th 2015 on http://медиатек.рф/ there was an open internet-voting on the selection of the winners in the First Russian competition of Mass Media, press-services of the Energy Industry companies and regional administrations “Media Energy Industry”.

The main aims of the competition were attraction of the journalists', specialists', experts' and the general public's attention to actual questions of the financing of Energy Industry and regional administrations, encouragement of the best corporate practices on informing the society about transformations in Russian power engineering.
The competition is supported by the Ministry of power engineering of the RF. The Expert council “Media Energy Industry” is headed by Dmitriy Peskov,  the press-secretary of the President of Russia, the Deputy Director of the Administration.

The rewarding of the winners took place with the participation of the representatives of the Ministry of Energy of Russia and the members of the Expert council in the time of the international forum “Energy efficiency, energy-saving and development of power engineering ENES-2015” on November 19th-20th 2015 in Moscow (www.enes-expo.ru).