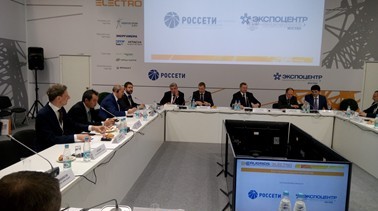 An important meeting between the CEO of Rosseti, OJSC, Oleg Budargin, and the top 20managers of the major enterprises of the electro-technical industry and the energy network contracting companies was organized within the framework of Energy Forum Rugrids-Electro. Prysmian Group took part in this meeting with an active role as local producer of energy cables.

Mr.Oleg Budargin thanked all Russian and foreign participants appreciating the fact that their collaboration with Rosseti did not decrease despite the difficult economic situation and pointed out that Rosseti increased the number of partners and didn’t lose any one since the company had been established. The CEO of Rosseti also addressed a question about the state of the art of electro-technical equipment’s production localization in Russia according to the new product substitution RF law.

Prysmian Group Russia, represented by its CEO Cesare Biggiogera, pointed out that already in 2007 Prysmian Group set up its clear strategy of manufacturing localization in Russia with a focus on production and know-how transfer of High Voltage cables. The latter is essential due to the vast Russian market which can’t be served with import only.

Consequently the Prysmian Russian factory located in Rybinsk is now also able to produce medium voltage (up to 35 kV) and extra high voltage (up to 330 kV) XLPE cables perfectly on time with the new RF law requirements. The growth of Rybinsk factory is a significant milestone for the Group’s expansion in the Russian market, localized production has definitely strengthened Prysmian’s competitive edge and presence in the local market.

Furthermore, Mr. Budargin emphasized that the investments of the Rosseti group will be reduced in comparison with the original plan set up before crisis but there will be a better and clear allocation of resources.” the Consolidation of subsidiaries, the increase of network reliability, the synergies and the use of new technologies will help us to spend the budget in a more effective way. The new equipment in compacted underground substations will also minimize the cost and the environmental impact” .

The CEO of Rosseti concluded  his speech underlining that in the next years will be also important to speed up the regional projects of network expansion and modernization and the integration with the Asiatic continent.